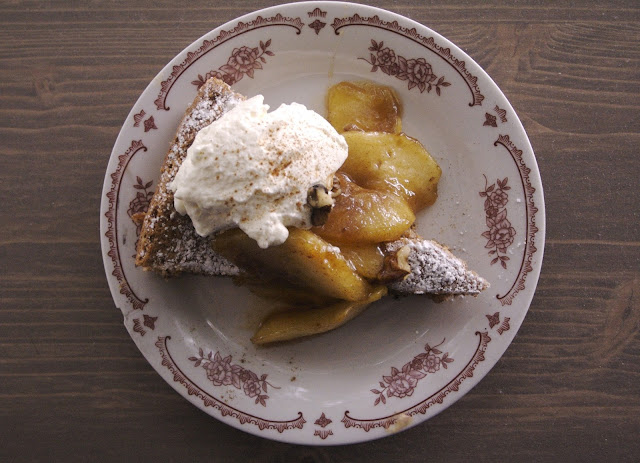 I have realized over the past couple of years how much I like to look ahead, planning what will happen in the coming months, and trying to push what is meant for the future until now. So when there was one cool day in late August, I was bent on making something Fall-ish. I wanted something simple, yet comforting. I pulled out my favorite autumn spices and looked for some decent apples, so that I could pretend it was already my favorite season.

I've been dying to share this recipe with you, as I made it quite awhile ago, but have waited to post it until now. I want you to enjoy it in the dead of Fall . . . when the flavors and produce are at their best. I'm learning on how to be more present--how to enjoy life as it comes, so I'm going to help you to do that, too :) 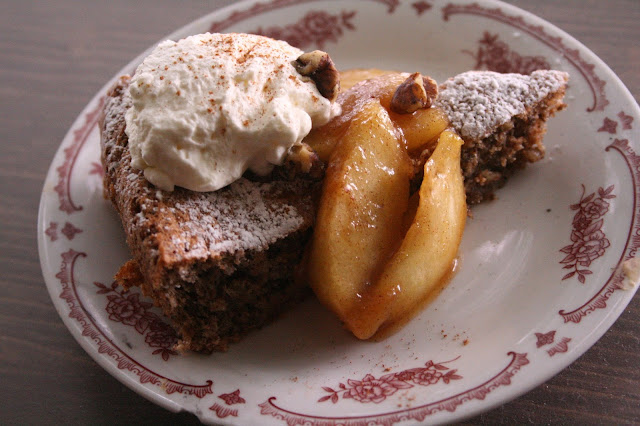 Walnut Cake with Apple Compote
makes one 9 or 10" round cake
Adapted from Food & Wine, September 2013

Preheat oven to 325 degrees F. Place a parchment round at the bottom of a 9 or 10" round springform pan. Butter the bottom and sides of the pan.

In a food processor, pulse the walnuts with a spoonful of the sugar and process just until finely ground. Remove from the food processor and stir in baking powder and cinnamon.

In an electric mixer fitted with the whip attachment, beat just the egg whites at high speed until soft peaks form. Remove to a separate bowl.

Place egg yolks and remaining sugar in same mixer and whip at medium-high speed until pale and thick (about 3 minutes). Turn the mixer to low and beat in the walnuts, just until combined.

Careful spread batter into prepared pan. Bake about 35 minutes, until cake is set. Cool cake to room temperature. Run a knife around the edges of the pan before releasing the sides of the pan.

For the compote, place sliced apples, lemon juice, brown sugar, cinnamon, nutmeg, and salt in a large saute pan. Place over medium-high heat until the liquid bubbles. Turn the heat to low and stir every minute or so, until the mixture is thick and the apples are soft, about 10-15 minutes. Stir in butter and vanilla, until butter melts. Serve over the cake warm or at room temperature. Serve cake with whipped cream, as well, if desired. 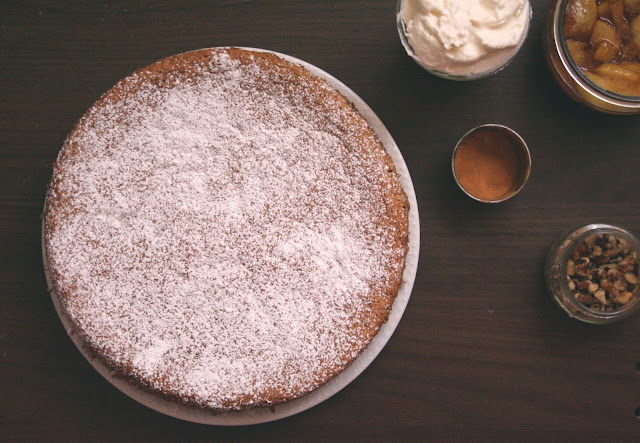