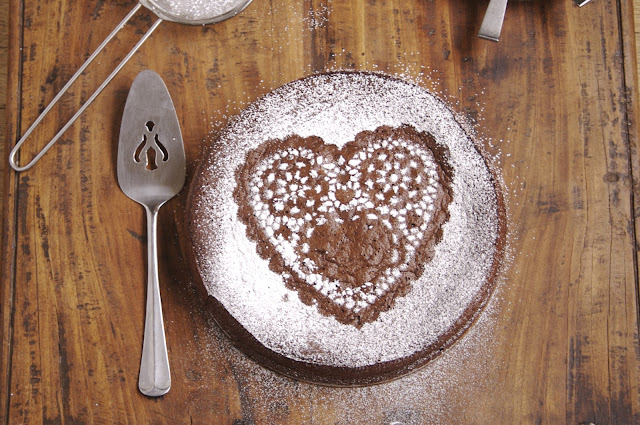 Valentine's Day: The day that separates the single people from the couples. On this day of division between those given flowers and the flower-less (I know, I know, so cynical), I bring you a dessert that unites another set of groups: those willing to go a completely different kind of flourless, and those who turn up their nose at the term "gluten-free."

Ah, the flourless chocolate cake: the dessert that Becky from The Vintage Mixer and I ordained as the quintessential dessert that everyone is not only willing to try, but eager to love.

Except for the extra arm workout we gave ourselves by hand-whisking the egg whites to stiff peaks, this recipe (only slightly altered from "Baked: New Frontiers in Baking") was quite easy . . . especially with the subtraction of the ganache topping the recipe calls for. I love ganache but just a modest sprinkling of powdered sugar atop the finished cake lends a simple and elegant presentation. Happy Valentine's Day! 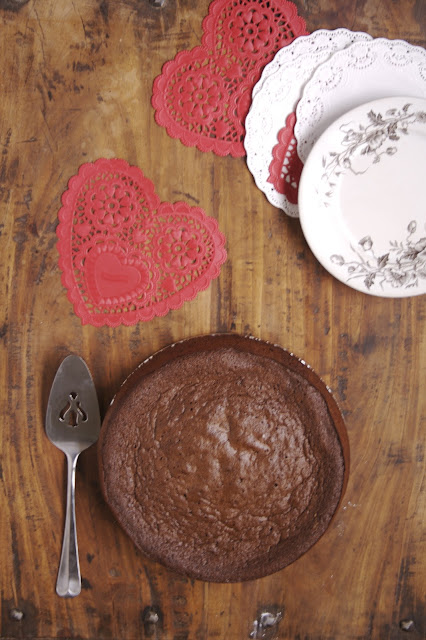 
Preheat oven to 350 degrees F. Line a 9" springform pan with a circle of parchment and grease the bottom and sides well.

In a double boiler, melt the dark chocolate. Set aside to cool.

In the meantime, cream the butter and sugar together on high speed for 5 minutes. Turn the mixer to low and add the eggs, one at a time, until incorporated. Scrape down the bowl. Add the cooled chocolate, vanilla, and coffee and mix until combined.

In another bowl, whisk the egg whites and salt until stiff peaks form. This will be MUCH faster if you use an electric mixer with the whisk attachment. If you use the same bowl as for the chocolate mixture, clean it out WELL or the egg whites will not reach stiff peaks.

Scoop one cup of egg whites into chocolate mixture and fold in carefully. Continue the process, about a cup at a time, until all of the egg white are incorporated.

Scoop batter into prepared pan and bake about 45 minutes until the edges are completely set and the center jiggles only slightly. Cool to room temperature before removing from pan and sprinkling with powdered sugar.

Store cake, wrapped, in the refrigerator but serve at room temperature (and alongside a glass of red wine. Trust me.). 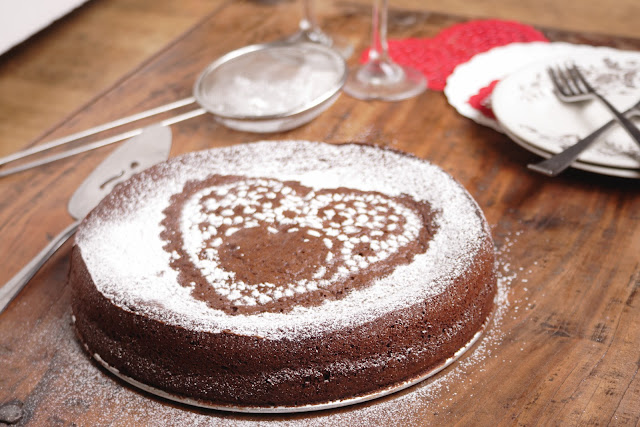