Pistachio & Raspberry Macarons (Or, If at First you Don't Succeed . . .) 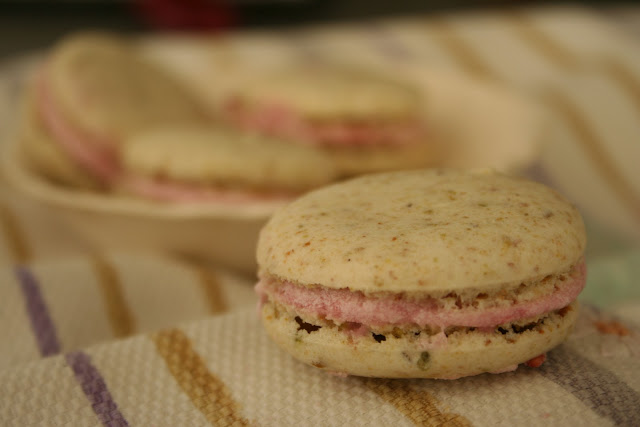 Is there ever a recipe that you want so badly to make but never have any success with it? For me, it was french macarons.

The first time I tried to make macarons, I wasn't careful with how I folded in the egg whites (not surprising since I'm always in a rush). The macarons spread out all over the baking sheet and were completely unusable. The second time, I was a bit more careful. It was in vain: the same thing happened. I blamed the recipe and threw in the towel . . . for about a week.

I couldn't get those stubborn little cookies out of my head. I tried a new recipe and the dainty cookies were lovely when baked. I decided to fill them the next day and kept them in the oven so I didn't have to mess with them until then. Well, I decided to make a cake with a friend the next day and preheated the oven. In about 10 minutes, a smell overwhelmingly like burnt popcorn filled my kitchen. I glared at the oven, dreading what I'd find when I opened the oven. I found dark and crispy little macarons, burnt to a crisp awaiting me. And then that thing happened where you start laughing but you're actually crying, trying to keep it together because I wasn't alone. That was the end of my macaron baking . . . for the time being.

About a month after that, my friend, Becky, emailed me, asking if I'd ever made macarons. I regaled her with the tales of my failed macaron-making, but decided I would try one last time. I don't like to pass up a chance to bake with Becky.

So, we got together, and after a whole lot of recipe tweaking, measurement conversions (a good chance to practice the math you learned in elementary school and probably never use), and a quick trip to get a baking sheet we were lacking, Becky and I had made ourselves a beautiful and delicious batch of perfect pistachio macarons. And for that, I am eternally grateful.

So, the next time you just can't get a recipe right, keep on trying, preferably with a friend, until you're successful. Just remember that old saying: If at first you don't succeed, try, try, (try) again. 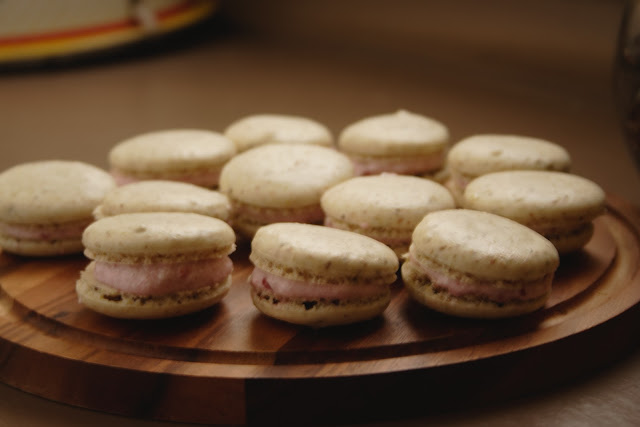 In the bowl of a mixer fitted with the whisk attachment, beat aged egg whites and cream of tartar on medium speed until soft peaks form. Slowly incorporate the sugar. Quickly mix in a few drops of green food coloring and mix until stiff peaks form.

Place the mixture in a pastry bag fitted with a 1/2 inch round tip. Following the guide (see photo above), pipe circles onto the silicone mat or parchment paper laid over the guide. Let rest about 30 minutes, until the top of the macarons are dry. Remove guide before placing pans in the oven.

Bake macarons for about 15 minutes, until the macarons are set and have some nice feet on them. Cool before CAREFULLY removing from the baking sheet.

Make the buttercream frosting. Fold in slightly crushed raspberries. Spoon a bit of the frosting onto half of the cookies. Place the other half of the cookie on top. Then do a little happy dance because you've just made the most beautiful and delicious macarons you've ever had :) 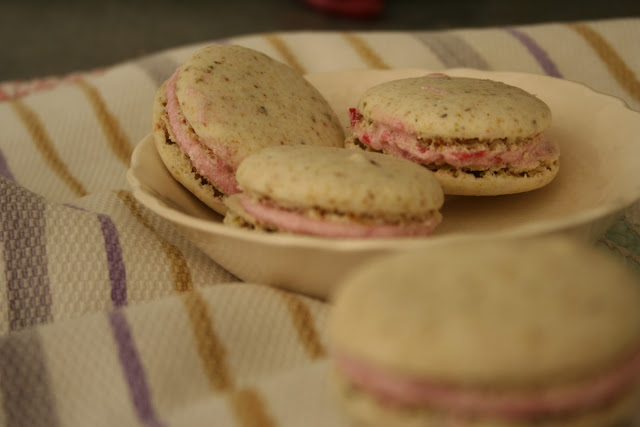