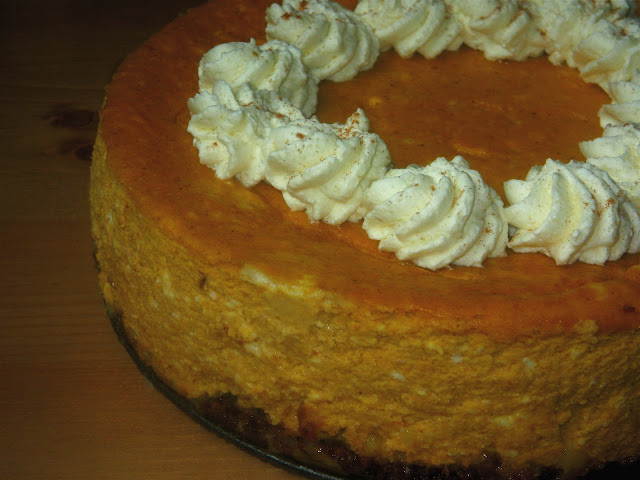 Now that the madness of Thanksgiving is over and I don't have 500+ pies to make, I can share with you some pictures and recipes of what I made for the day, like this one for pumpkin cheesecake. My day was filled surrounded by the love of good friends and food here in Salt Lake. I, of course, offered to do the desserts. 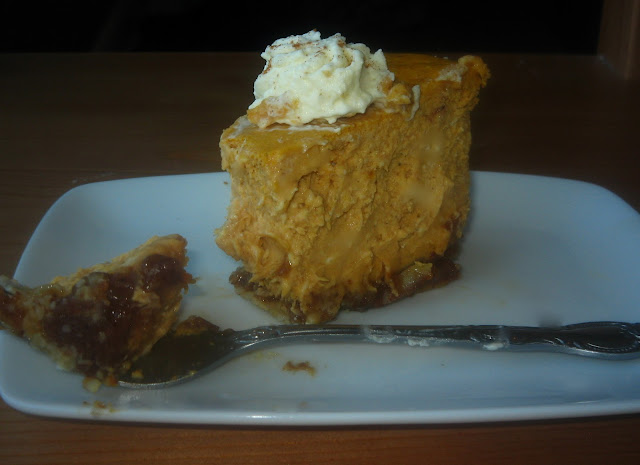 Because I didn't have the time to make all of my desserts gluten-free, my dessert of choice to eat was the pumpkin cheesecake, which is a fun take on the traditional pumpkin pie. After talking to a few people, it seems that they opted to make a pumpkin cheesecake instead of pumpkin pie this year. Perhaps it is because it's much easier to make a cheesecake crust deliciously gluten-free. Or perhaps it's the (amazingly) creamy texture as opposed to the grainy-er one of pumpkin pie. Whatever the reason, it's a darn good choice. As soon as you bite into this dessert, you get all of the spices and flavor of the perfect fall pumpkin pie, but with a light and creamy texture, and an added crunch and sweetness from the snickerdoodle-almond crust. 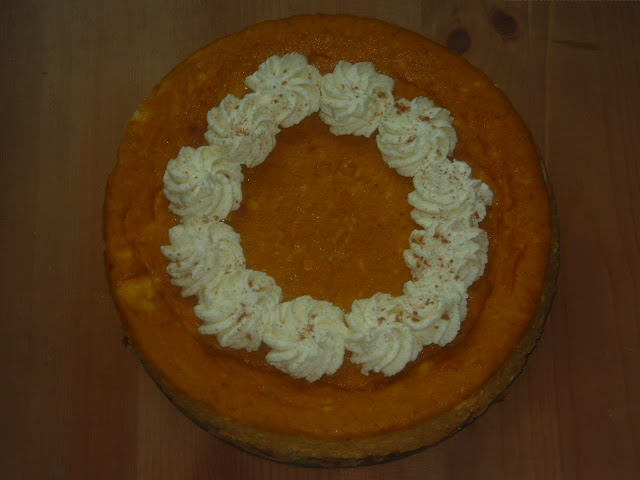 Crush cookies and combine with the rest of ingredients, by hand, until well-combined. Push mixture into bottom of prepared pan. Bake for 10 minutes. Cool.

Combine cream cheese and sugars in the bowl of an electric mixer fitted with paddle attachment. Mix on medium speed several minutes, until well-combined. Scrape down bowl. Add eggs one at a time and mix just until incorporated. Add pumpkin, cinnamon, vanilla, ginger, and nutmeg. Mix on low speed until incorporated. Scrape down bowl. Add cream in a steady stream and mix just until it's no longer streaky.

Pour mixture into cooled crust. Wrap crust in double layer of aluminum foil. Place cheesecake in a roasting pan and place in oven. Fill roasting pan with hot water until the water reaches about halfway up the sides of the pan.

Bake for 55-60 minutes. When done, the outside will be puffy while the inside is still jiggly. At this point, turn off the oven and prop the door open for 1 hour. Remove the cheesecake from the oven and the roasting pan and allow to cool, at room temperature, for 2 hours. Refrigerate for at least 2 hours before serving.

If desired, top with whipped cream and a sprinkling of cinnamon.
Posted by Haley Burke at 5:45 PM